Create Your Own Path

With all the excitement around the new consoles, it’s truly a time to celebrate gaming as a medium. The fantastic Spiderman Miles Morales and the beautifully remade Demon’s Souls have been taking the headlines everywhere as the heavyweight launch titles of the PlayStation 5 but look a little deeper and there are other gems waiting to be found in amongst those big shiny diamonds. One such of these gems is The Pathless, a game that may have snuck under your radar. With the stunning Abzu as their first game, Giant Squid are a studio not to be ignored and The Pathless expands on their gorgeous art style and serene settings with a longer experience that is transcending and captivating. If you like the freedom to explore and games where you don’t need to worry about combat, The Pathless simply has to be on your to-play list. Interested to know more? Read on and see why this game had me utterly transfixed in my 10-hour run through. 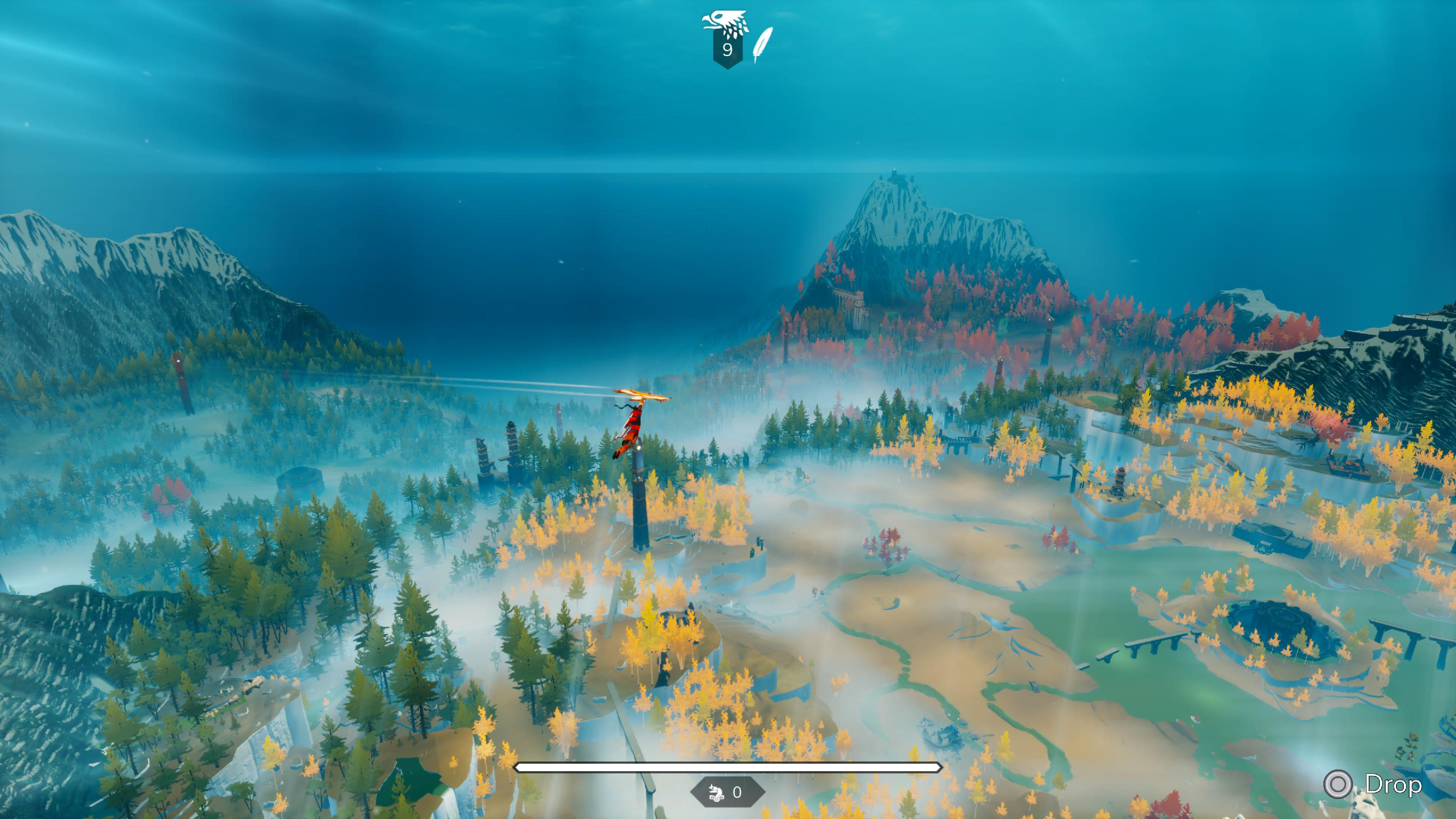 The Pathless is unique in that you are introduced to basic mechanics, dropped into the world and then abandoned by any kind of guide at all. The world is your oyster and you’re free to explore at your own leisure. There is no map at all in the game, as The Hunter, a cloaked female archer, the player can simply head in whatever direction they desire.

Using the eagle vision ability, you can see highlighted landmarks that are coloured either blue or red. If they’re blue, the area is fully explored, if they’re red there’s something not yet achieved there. Eagle vision can see for pretty large distances, so reaching high vantage points is a must if the player wants to be able to get their bearings. The sense of wonder the game instils is simply brilliant. Sure, sometimes it can get a little disorienting but mostly it’s just refreshing to be left to your own devices. There’s no pressure to head to any single location and there’s no one around to shout objectives at you, it’s just so peaceful.

Find Your Own Story

In regards to its story, The Pathless mainly unfolds through the discovering of lore around the world. There is a lot to learn as the player explores and no one who plays the game will learn its secrets in the same order. There’s a lot of glyphs to read and souls of dead warriors to learn bits of information from, which is where the core of story progression will happen. There are other bits of story in between boss fights but in general the story is through collectables and in the final section of the game. The style of lore discovery suits this game as it’s all about being able to forge your own path and not working in an order, so it works really well.

Satisfying and Relaxing, the Perfect Mix

Movement in The Pathless, when the player gets it right, is like a dance of nature. Around the map are talismans; floating objects that can be shot to build up a movement gauge. This gauge allows the Hunter to move much quicker, gliding along the various terrains as the bar depletes. To keep up the momentum, the player can shoot more talismans to maintain the flowing movement and keep speeds up. 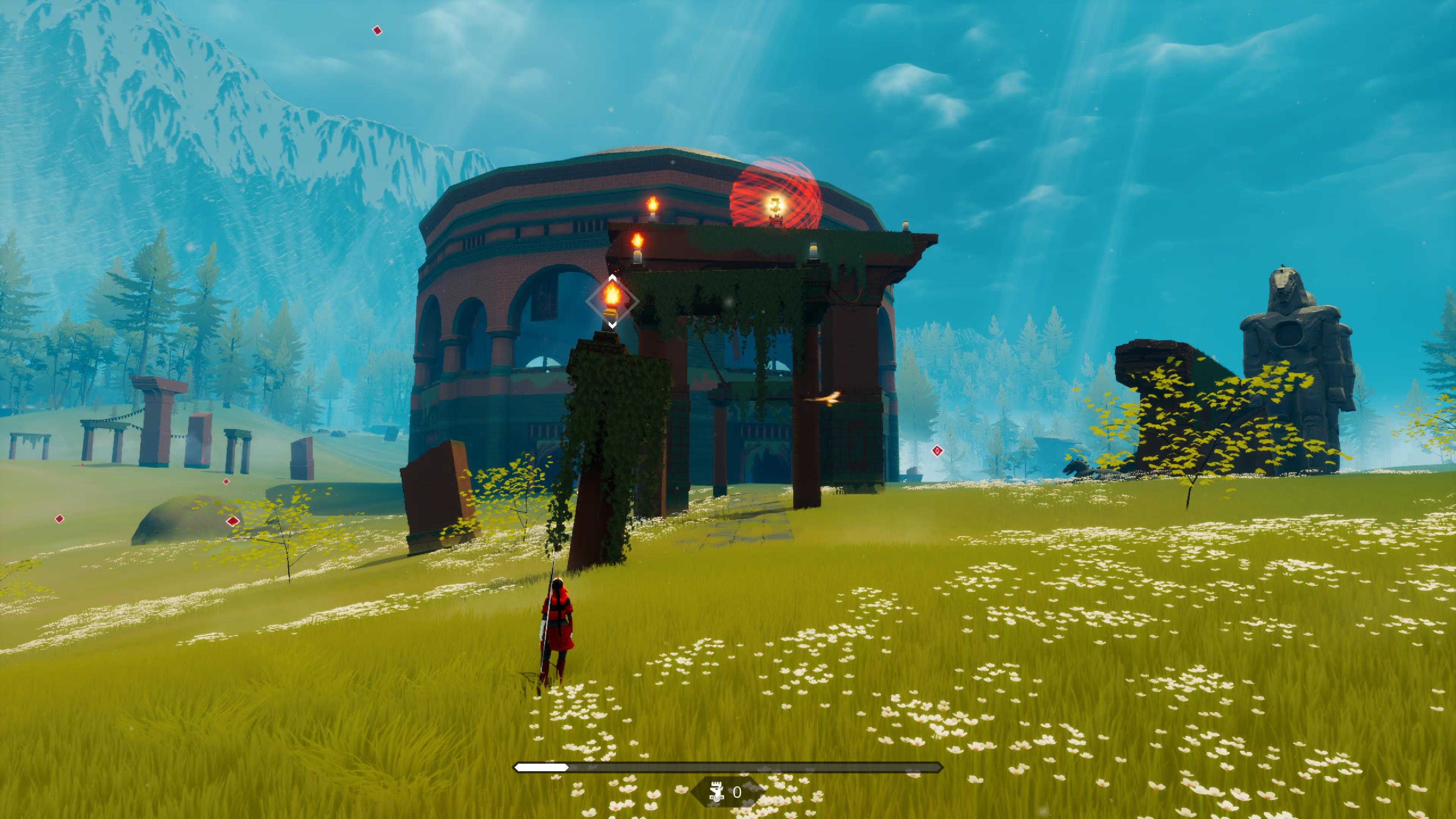 Since there’s no manual aim required in the game at all, the talismans are easy to shoot and with simple, timed holds of the trigger the hunter will be gracefully navigating the islands at high speeds in no time. It feels like an alternative but just as gratifying version of the web-swinging mechanic in Spider Man, it’s just so smooth and feels so fantastic that generally you won’t be concerned with the lack of fast travel.

Aside from sliding around shooting talismans, there’s also your trusty eagle companion to help you manoeuvre at high altitudes and to travel extremely long distances. Your bird buddy can help you glide across the sky and can keep you maintaining height as you unlock more flaps by completing the various tasks. Each time you restore light to the land, you get closer to earning another flap which makes getting around much easier. As mentioned previously, high ground is your best friend to see where you should head next and having more eagle flaps makes that incredibly easier. Also, you can pet the eagle which means its an instant classic anyway. 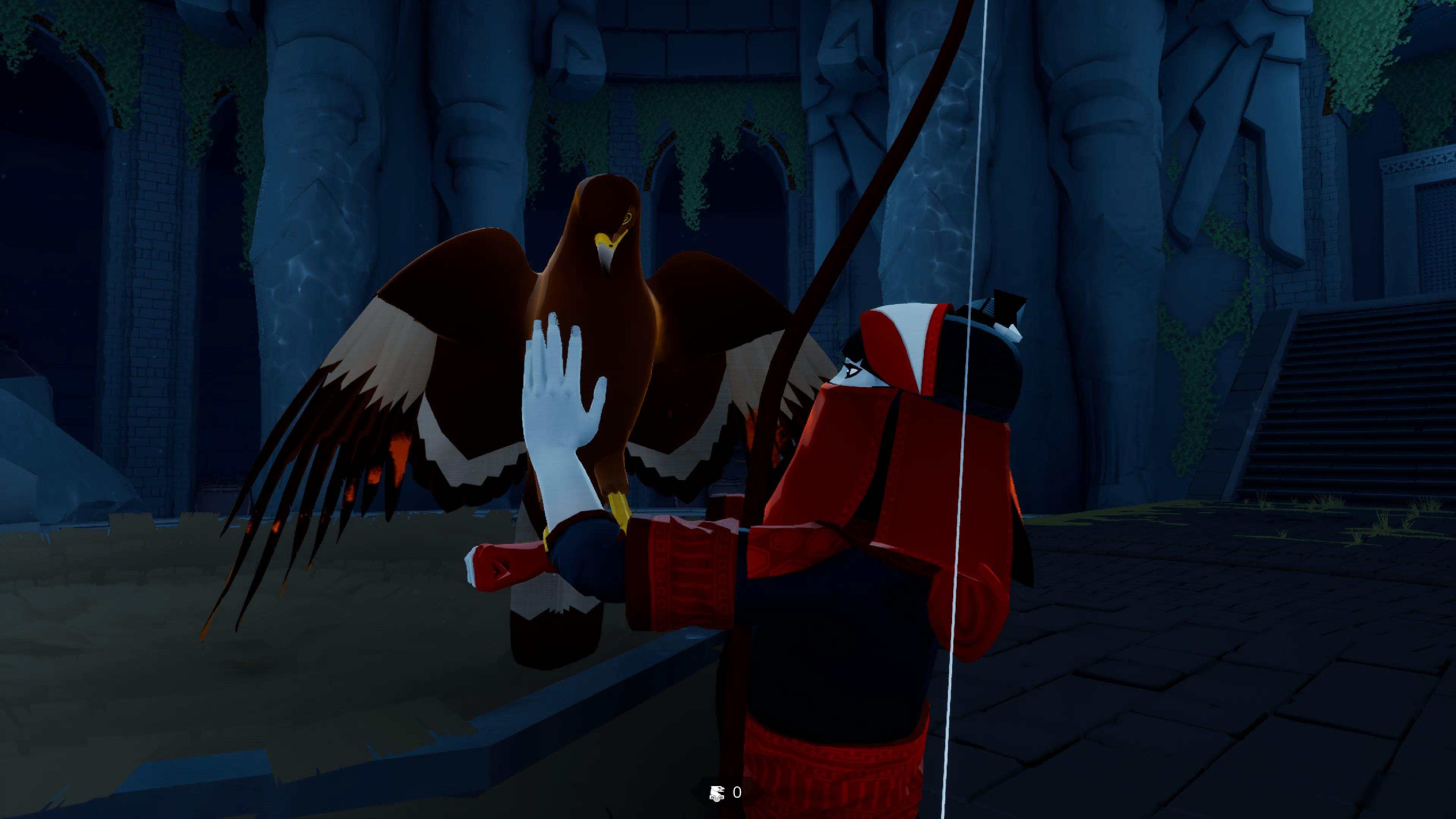 A Treat For the Eyes and Ears

The beautiful islands that you explore add to the serenity of the experience. The colours are vivid and the locations diverse. There’re forests full of deer, snowy mountains with sparkling ice and open plains with vast expanses to cover. It may not be the most visually impressive game you will play but the art style itself is still stunning in its beautiful simplicity. Accompanying the visuals is a soundtrack that is both beautiful and melancholic. Austin Wintory did an amazing job with some epic sounding moments alongside some tranquil and mystical softer moments as you wander around solving puzzles and defeating the cursed Gods known as The Tall Ones.

Puzzling But Not Confusing

The main core of the gameplay is using your bow to solve puzzles. There are a handful of different puzzle types, all requiring the bow to shoot and activate switches. Your eagle is also helpful for carrying objects to place on pressure plates and the combination of these is how you will solve them. Again, the game doesn’t overload you with text explaining how to solve puzzles, you’re left to figure them out for yourselves. Once you’ve completed each type of puzzle, they become increasingly complicated but very manageable. The puzzles are difficult enough to make you think but not so much that you should ever need a guide. Just explore every possibility and the answer will eventually come to you. The puzzles are incredibly satisfying to solve, with some solutions meaning you pull off trick shots with the bow involving deflecting flaming arrows around corners and through hoops to light up torches. To actually execute the shots is really simple but how it feels when you do it is very gratifying.

There are only a few types of puzzle in the game but throughout the puzzles are just about varied enough to not become too repetitive. If the game had been longer (it sits at around 10 hours) then they would have outstayed their welcome but there’s enough changes to stay fresh. The puzzles are the way in which you earn lightstones, which are pieces that you use to return light to the lands.

The alternative to the bigger puzzles is smaller and less obvious puzzles that create lanterns of light. These lanterns don’t require you to shoot arrows in elaborate angles but instead perform a simpler task using movement, intelligence or reactions. A few examples include: lighting fires in specific orders, memory tests by playing “Simon says” with bells and movement challenges where you must perform specific actions in a time limit. Some of these puzzles are easy to spot and work out but there are a few more secretive ones that require you to use some logic to solve. They’re really fun to find though and it is brilliant that you are rewarded so much for just experimenting in your time in the world.

Battles To Rival the Best

Where the game evolves into something else is in its boss battles and stealth sections. Firstly, as you explore, there is a storm that roams around the world that you can get caught up in (its actually quite terrifying) and inside is the cursed God of the area. This triggers a stealth section where the player needs to return to the injured Eagle and avoid the boss. These sections were definitely my low point of the game as they were very cumbersome and a little bit pointless. They waste time and if you’re caught (sometimes unfairly), it costs you light which is a pain as it can render upgrading flaps more difficult. 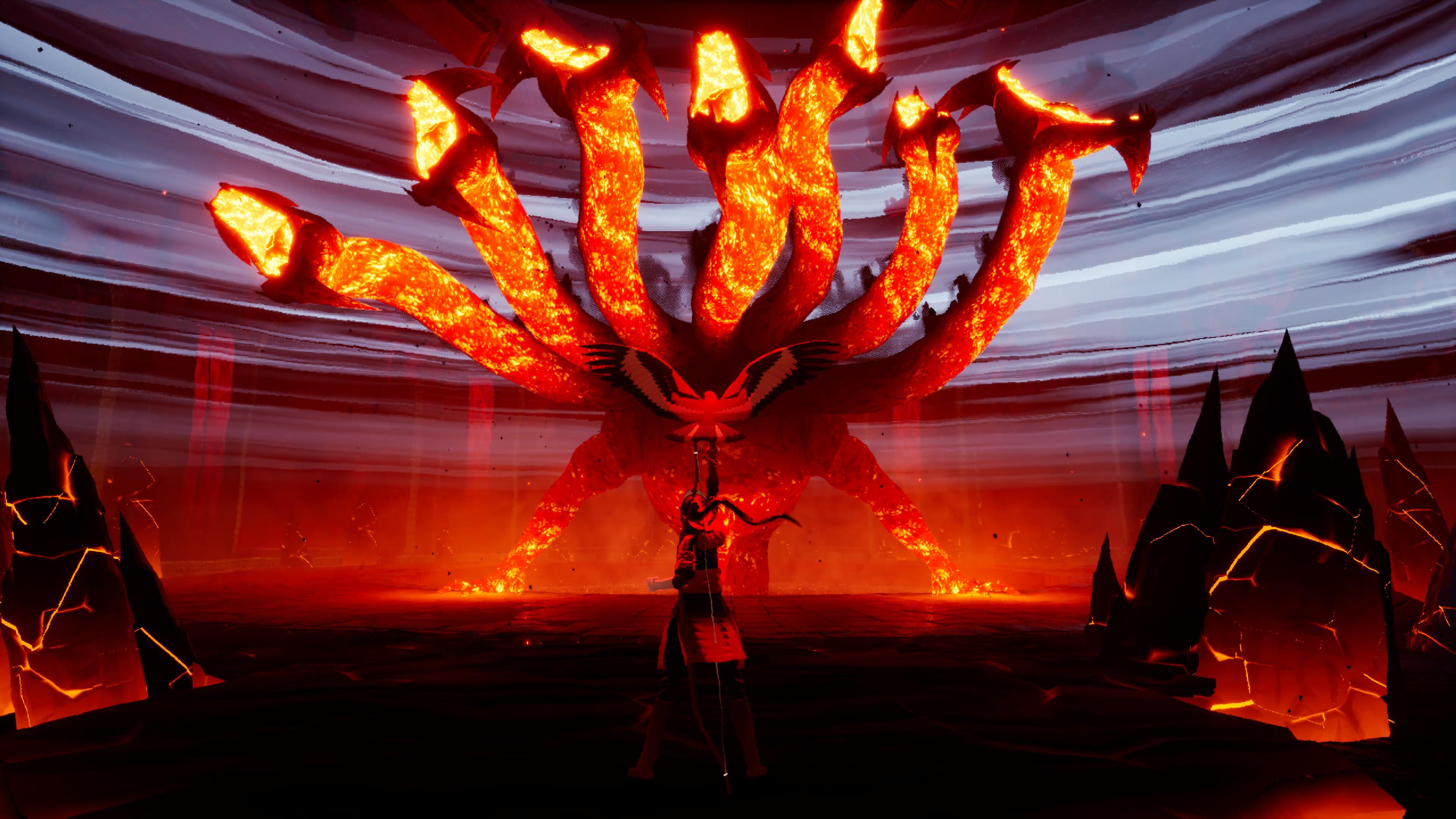 On the other hand, when you’re actually ready to fight the bosses, it’s much better. You cannot actually die in the game so it stops any frustration. When you’ve restored enough light, its time to fight The Tall Ones. These are ancient beasts that roam and bring darkness to the lands. These battles are epic and visually impressive. Each boss feels different to fight and have their own unique ways of defeating them, adding elements of puzzle solving into basic dodging and shooting combat mechanics. It might displease some that a game so tranquil still has combat sections but they don’t overstay their welcome. They’re very fun to play and incredibly forgiving in terms of difficulty so it never feels like a problem, it just adds some nice variety from the puzzle solving. 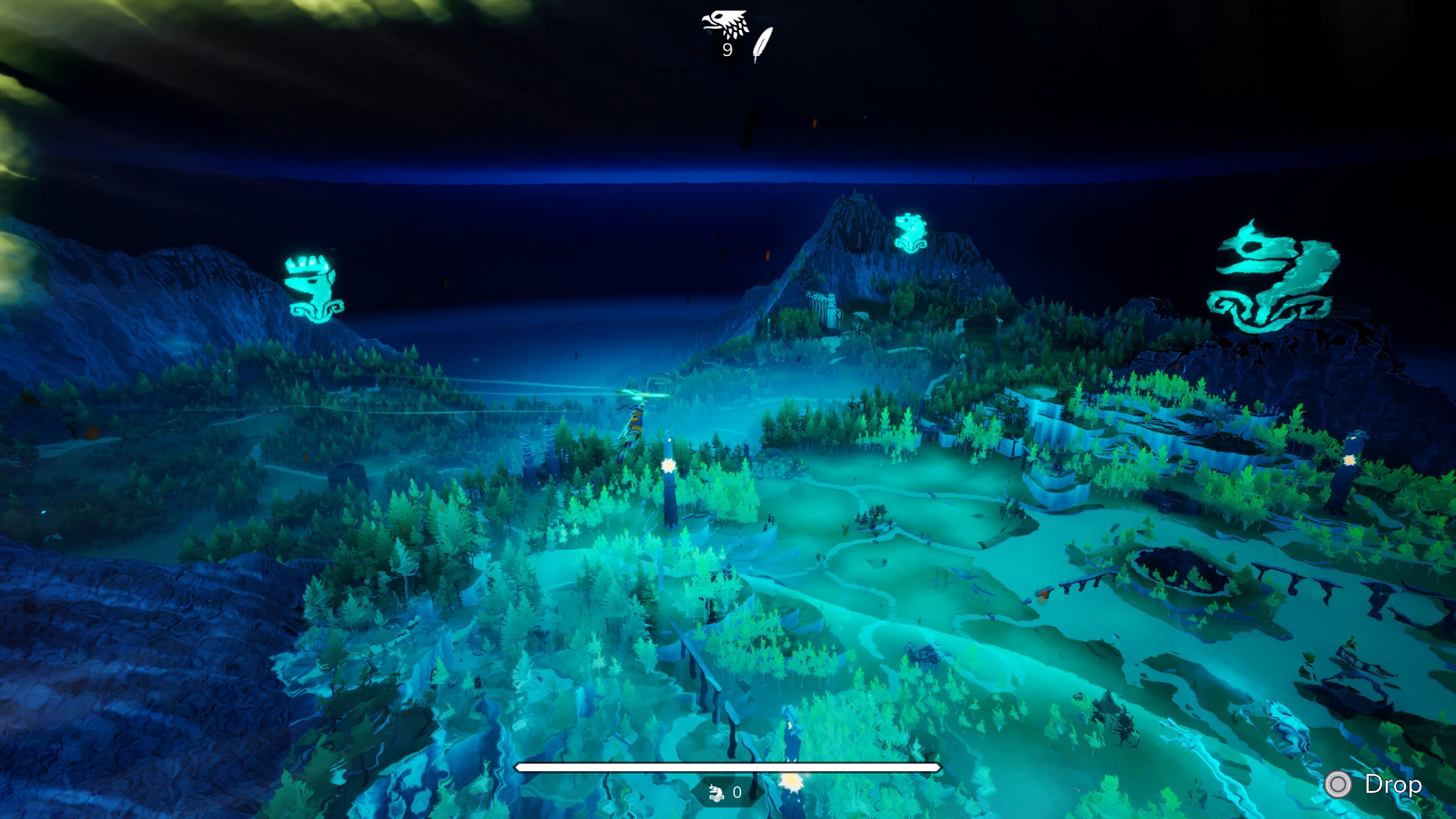 The Pathless is a wonderfully simple game with lots to see and puzzles galore. Think of it as a mixture of The Witness and Breath of the Wild and you’re probably on the right lines. As its story is entirely told in finding bits of lore it isn’t quite impactful enough to truly grip you by itself but the gameplay and the world are such a joy to be in that it ends up not being too much of a problem. The boss battles feel epic and very fun.

I had a blast taking them down and as you can’t die, the game is perfect for a relaxing session of gaming when you need to just wind down.  But the stealth sections that precede them are a little bit annoying when you just want to be left to explore. It can become a little difficult to follow where to go due to their not being a set course and the lack of fast travel will frustrate some when it comes to the end-game grind but when movement feels that fun it can be forgiven. Just remember high ground is your friend and you will be fine.

I went into this game with little expectations and I was pleasantly surprised. It’s a game I didn’t have a lot of interest in but wow am I glad I’ve played it now. Please don’t let The Pathless pass you by amongst the big hitters, add it to your must-plays of your shiny new PS5. 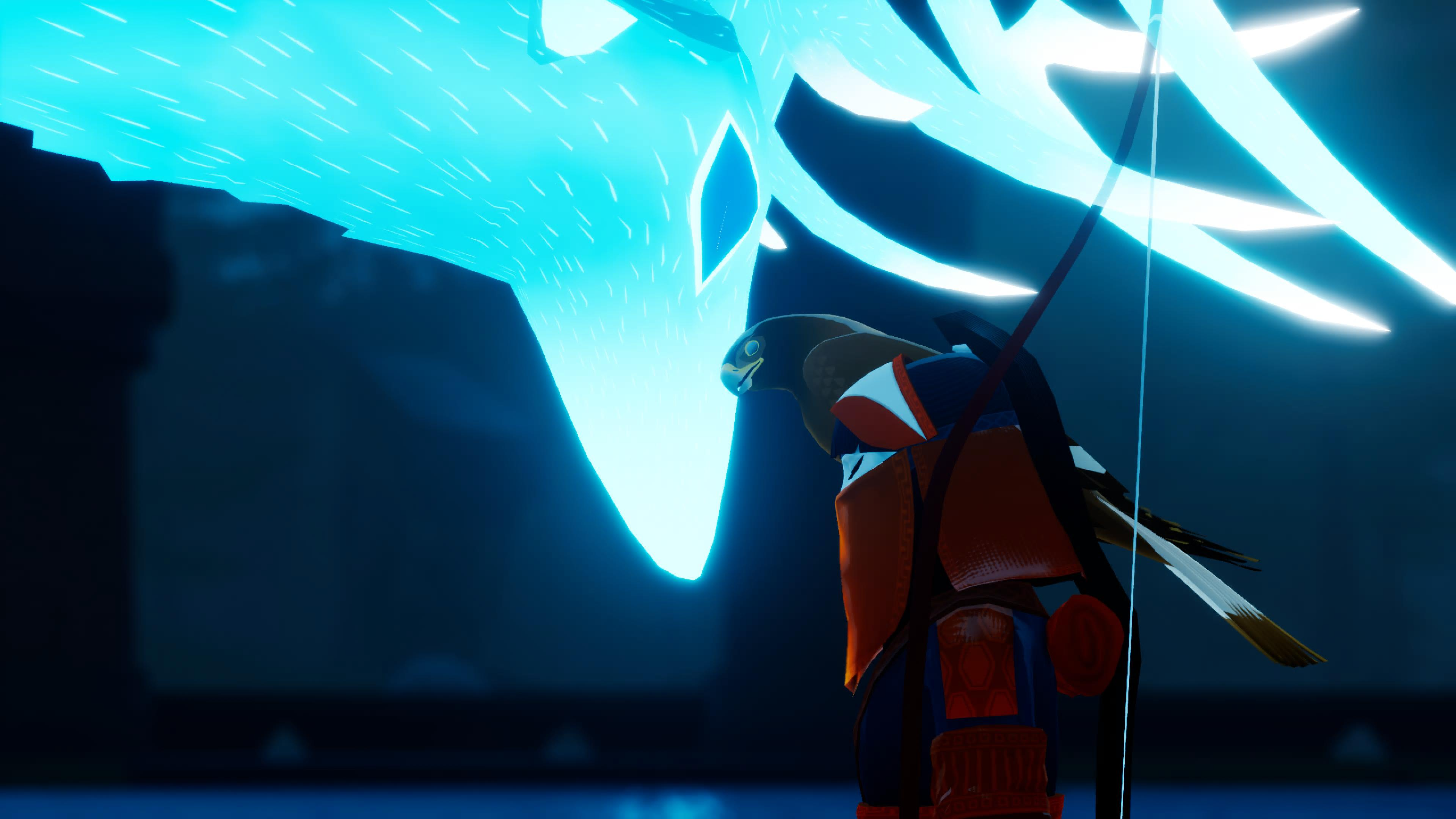